Getting to Know Seamus, and Sheep Camp with Scott Glen 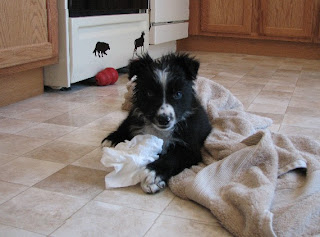 Seamus is currently my youngest dog. I sent him to Scott Glen for training last November. Seamus was young, only 10 months, when I sent him. I sent him so young because he was ready for somewhat more serious training, and I’m just not capable enough yet to manage a young, fast, enthusiastic dog. I feel that a proper foundation is priceless, and also that it would create a lot more work for a trainer having to fix bad habits that would likely arise were I to try to muddle through with him at once-weekly lessons, and send him for training later. Seamus stayed with Scott and Jenny seven months, traveling with them when they hit the road in May, and we reunited in early June.
The first lesson I had with Scott and Seamus showed me that Seamus wasn’t going to casually flop his loyalty and obedience back to me; in fact, he didn’t really remember me until he was loaded up in my car to head home again. He’d been gone nearly as long as he’d been with me, so this wasn’t a surprise.
The first lesson with Seamus without Scott was not so great. For the first session, I worked him in a small pen, to keep everything close and to be able to enforce corrections when needed. He was very tense and things weren’t great, but I thought for the second session (after he had a break while I worked one of the other dogs) he might do better in a larger space where he had more room. However, we humans chose to work in a part of the field which had very heavy pressure to one side; not a good plan. Apparently the excitement, stress, pressure, and “new” handler were more than Seamus could cope with, and he more or less acted like the young, inexperienced dog he is, and all training had gone out of his head. Splitting and chasing were much easier than self-control. Eventually I got some acceptable work out of him, but I could see I had my work cut out for me.
Our first lesson without Scott. Photo by Gene Sheninger. 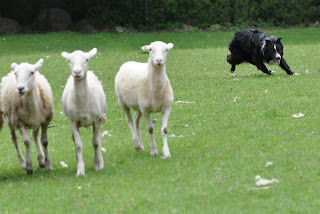 I went to Roger and Heather Millen’s Fetch Gate farm June 9-12 for a clinic with Scott. This clinic was mainly about getting into the driver’s seat with Seamus. I worked him each day, and Scott helped me wean Seamus off him and start tuning in to me. Seamus is generally a pretty biddable dog, but he’s also willing to take advantage of me when he realizes he can get away with it. So, the general themes for me to work on were making sure I got a good lie down every time I asked for it, keeping him out off the sheep as needed, and that he’d come when called; his recall to me was the best of the three and needs the least attention.
Scott and Jenny’s place is flat, with few or no trees for sheep to hide behind, and the sheep he uses for training (at least the young dogs) are somewhat heavy when compared with the hair sheep we’ll encounter most often in the northeast. There’s also generally no one to hold sheep for Scott when he’s training. All these factors create new challenges for an inexperienced dog, and all of them were present at Fetch Gate except for trees. He seemed to adjust to most of these factors with a little help, so I think going forward, he’ll become comfortable with the possibility of temporarily losing sight of his sheep while on an outrun in a hilly field, encountering another person and dog when he gets to his sheep, and the need to rate himself on lighter sheep. With the variety of terrain at Gene’s place, I’ll be able to work on having him look for sheep trees as well, later as he gets more sensible.
By my last session with Seamus at Sheep Camp, Scott stayed outside the field, and had the other handlers report to him on how we were doing, and watched us from the corner of his eye. I felt really good about how Seamus worked for me, and he did everything I asked, even from a good distance. He worked thoughtfully and in partnership with me. I stopped without regard to our allotted work time, because there was nothing more to be gained by working longer. I was full of hope and enthusiasm for the possibilities of us as a team.
Seamus on Day 3 of Sheep Camp. Photo by Jenny Glen. 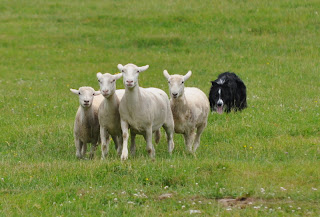 With four days and generous work sessions, I worked Bran and Dare a session each, and also used Dare to help set sheep while others were having their time with Scott. Holding out is something we are not particularly good at, so we haven’t done much of it. We didn’t remotely resemble “pros,” but what we did manage was an improvement over the last times I’ve tried to hold with her, so I was glad we were able to take our turn helping out. Dare has been working well for me lately, and in general, I felt that she needed more fine-tuning than “fixing.” The main areas I wanted to work on were her lift (which has gotten better as far as her thoughtfulness goes, but still needs improvement), and squaring up her inside flanks. I told Scott where I thought we needed to focus, then worked her to demonstrate. She worked reasonably well, and Scott pointed out that I was letting her slide on the lie down or stop, and if I had a good stop on the drive, the inside flanks would be better. When I re-established my intent to enforce the lie down, much of the rest improved. Imagine that! He also showed me a little exercise I could work if I really felt I wanted to focus on those flanks, by having the sheep, dog, and I sort of in a triangle, and sending her behind me.
Dare on the fetch at Sheep Camp. Photo by Jenny Glen. 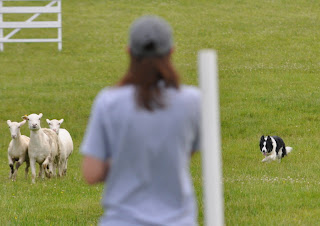 Bran has been a very challenging dog for me to handle Her strong points are a good shape to her outrun, and usually a good shape to her flanks. On the other hand, she has very little eye, and sometimes it seems not much feel for the sheep. She is a fun little dog at home, but more independent than my previous dogs. Unfortunately this independence shows on sheep as well. She’s basically got her own agenda, and getting her to do what’s needed to get the sheep where I want them without her jiggering them up is often a struggle. So, our work tends to be very inconsistent, and I am now facing the possibility that I may or may not trial her again. I will continue working with her because she enjoys it, and I enjoy it even when she frustrates me, but for now, I won’t be entering her in anything. I’m hoping with time and maturity, and continued work of course, she will become more reliable. I’ll just have to wait and see.
Bran’s work session happened to be timed just as thunderstorms were rolling in. Bran is sound sensitive, and oddly, this worked to my advantage. She’s keen enough to work that she didn’t leave her sheep, but her concern over the thunder seemed to let her relinquish control to me. She was more willing to do as she was told, therefore she worked better, and in turn, I was encouraged and not fighting her as much. Perhaps I should do all her training during thunder, or play CDs of thunderstorms while training!
Bran at our pre-Sheep Camp lesson with Scott. Photo by Diane Thompson. 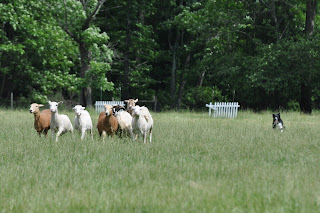 I am very happy with how things went at Sheep Camp. There were handlers and dog of different levels working, which gave me the opportunity to learn from others dealing with the same type of issues I might be having, as well as watching the more advanced dogs and their handlers and thinking about what things might come up for me in the future as my dogs and I progress in our work.
Next: PA State Championship at Sheepy Hollow in Hop Bottom.
Posted by Kelliwic at 10:18 No comments:

Thanks for logging in to read my blog! I hope to journal some of the adventures I've got planned for this summer, most of which are related to learning to train my Border Collies as working sheepdogs, my efforts to become a better handler, and perhaps the occasional sheepdog trial.


My journey as a sheepdogger began with Kaylie, my first Border Collie. 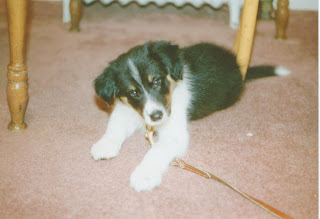 She was a fantastic dog in many ways, and I consider myself very fortunate to have had her. Kaylie was of nice working breeding; for those of you readers who, like me, are always curious about how dogs are bred, her sire was Walt Jagger's Imp. Celt, and her dam was Imp. Jill (Jen), who was a granddaughter of Templeton's #Roy.


When she was an older puppy (sometime between seven and 10 months old, I don't recall exactly), I wanted to try her on sheep. I knew she was bred to work, though the thought that I would ever become interested enough in "herding" to pursue it seemed very unlikely at the time. I found a person who would allow me to bring her to his field and see what there was to see. To my surprise, watching Kaylie turn on to the sheep and start using instinct to control them also sparked something in me. I began taking lessons when I could, driving almost four hours round trip.


Kaylie after a handful of lessons with me and about a month of in-house training with our instructor. Unfortunately, I don't have many photos of Kaylie on sheep. 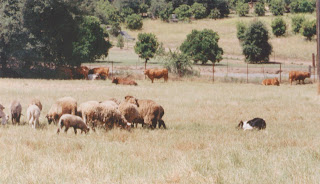 Kaylie and I were able to take some lessons on and off over the years, but due to life being life and bringing about various major changes, I wasn't able to continue lessons with any consistency. It's always easy for a novice like me to think the dog would have been a great worker "if only" she'd had the right handler, but looking back on it, I still believe that's true. The two offers that I received to buy her, with as little training as she had, reinforce my sense that she had some talent and I'm not entirely blinded by my love for my dog.


Regardless of how far we never went as a sheepdogging team, I still owe everything to Kaylie. She is the one who inspired me to "just see" what she could do, and who started it all for me. She was a very special dog.


One of the last photos of Kaylie, taken the day before I let her go. 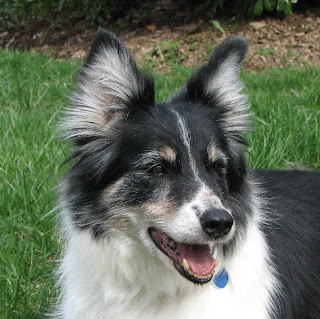