What a treat to have my mom accompany me to the trial! I understand how boring it is for most people to watch a sheepdog trial if they aren’t involved with it, but it’s nice to have someone rooting for me under the tent now and then. It also makes some aspects of traveling with three dogs a lot easier when I have help. Thanks, Mom!


Getting the car ready for the day. 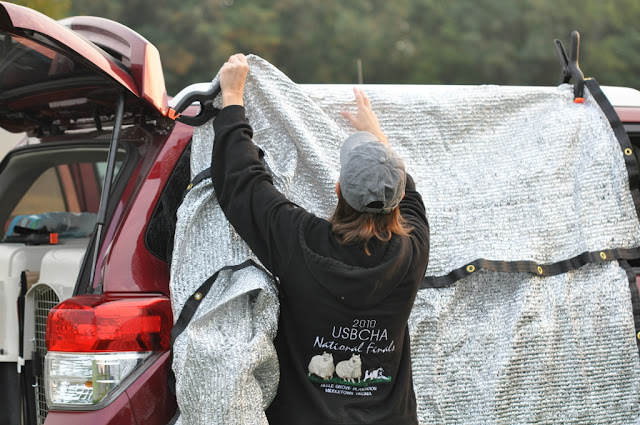 The NEBCA Novice Finals were held at Peter VandeCar's High Point Farm in Knox, New York, and judged by Bernie Armata. The classes were Novice/Novice, Pro/Novice, and Ranch. There were three runs for each class; each handler's lowest score was dropped, and placings were determined by the total of their highest two scores. Nov/Nov would run twice on Saturday and once on Sunday. Dare was the only one of my dogs qualified.


The sheep were Dorpers, with a sprinkle of Cheviots mixed in. The Cheviots didn’t want to participate, and the packets which drew two Dorpers and a Cheviot generally had a lot more work to do. Unfortunately, I can not blame the runs on this, as I drew three Dorpers for each of my three runs. I can only imagine how much more ragged still our runs might have been.
Several more experienced handlers took turns setting for the classes, and grain was used to set as well, so in spite of the handlers’ best efforts, the setting was not always even. Some handlers used their dogs quite a bit to hold, moving them till the sheep were still and trying to keep the sheep spotted till the dog on course approached. Others used their dogs to the slightest possible degree, holding mainly with their own presence and the grain. While grain undoubtedly made setting easier for the folks at the top, it often resulted in startled sheep, who were engrossed in grain nearly until the moment dogs were on top of them.
The field as viewed from the post in N/N was mainly level till just before the setout, where a low hill bumped up somewhat steeply, with another rise behind that. Dogs being sent left would encounter two ridges that tended to draw them in flat; dogs being sent right had a more gradual approach, but a large tree was in the path that was probably the most “correct” line for the right hand outrun. Dogs cutting to the inside of the tree would most likely be too tight, so they needed to go to the outside of the tree. I discussed strategy with Gene and debated hard with myself about which way to send Dare. The right was her natural side, but her come-bye had been better in our recent lessons. The exhaust was to the far left at the bottom of the field, and ultimately I decided to send left. We frequently work on a similar hill at Gene’s, and I didn’t feel she’d pull in just for the sake of (possibly) not seeing her sheep. Also, I felt it was very likely that if sent to the right, she would “cheat” on her outrun and stay to the inside of the tree. Either way, I didn’t feel confident that she’d take an out if I tried to widen her. I finally decided that if the sheep either got away on their own or broke away due to her being too tight, it would be much harder to get things fixed if they broke left and headed to the exhaust (as I felt she’d lose her cool and go into chase mode), so I finally settled on sending left. I fretted about it every run, but ended up sending left for all three runs. The turn at the post for Nov/Nov would be counter-clockwise, backwards for the course, which was a left hand drive/wear. This was intended to give the novice dogs a chance to cover that heavy pressure from the exhaust when making the turn. 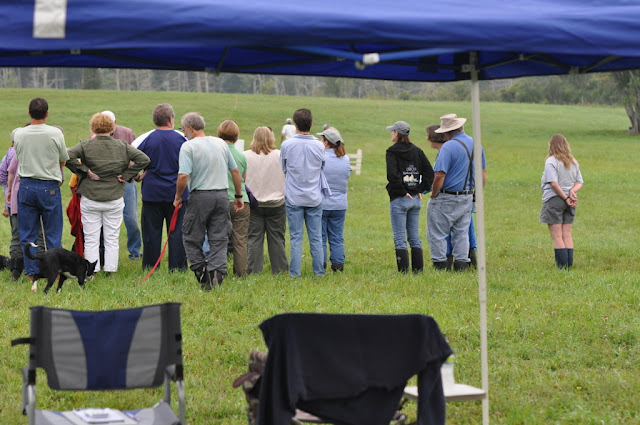 None of my runs were pretty, but I'll post them all anyway. There's little point in having this blog as a journal for myself if I can't be completely open. All photos and video of me were taken by my mom and are (c)Regina Ireland-Auer. I am very lucky to have any photos at all from Saturday; I goofed big-time after the runs were done for the day, and formatted my camera's memory card (which deletes all photos, usually irretrievably). Kudos to my stepdad, John Auer, who researched the problem for me and suggested I try Pandora Recovery. It was a success, and many photos were saved!

Run 1: The Sort-Of-Okay
Dare leaves on her outrun on a decent path.
Joe Evans is holding with grain and basically no dog (his dog was way off by the tree on the right hand side, I think). He had them nice and quiet, but they were startled by Dare,
who came in too flat and too fast. Cindy Schmitt is working push out at the top. 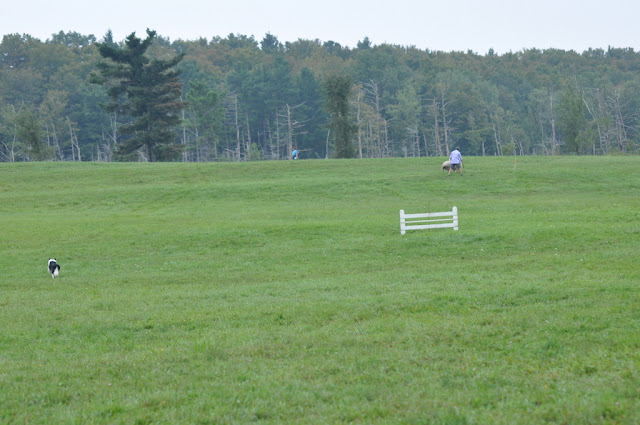 Surprisingly, considering how flat Dare came in at the top, she got around them and they came through the fetch panels. Unfortunately, this was done at warp speed, as with most of her fetches. 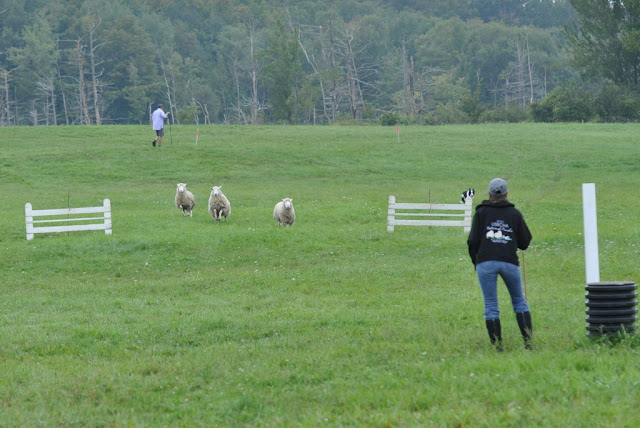 At the post. I think I may have been giving her the wrong flank after the fetch panels to try to turn the post the right way (the wrong way at this trial).
I remember catching myself doing it in one of the runs, but don't remember which one. 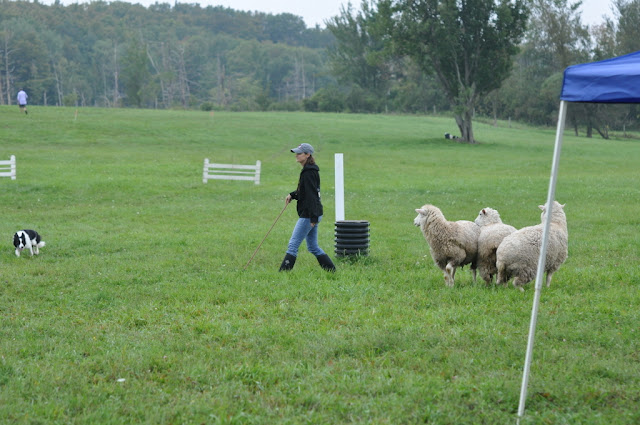 Whee! Zig-zagging the sheep all over the place on the assisted drive sure keeps things exciting! 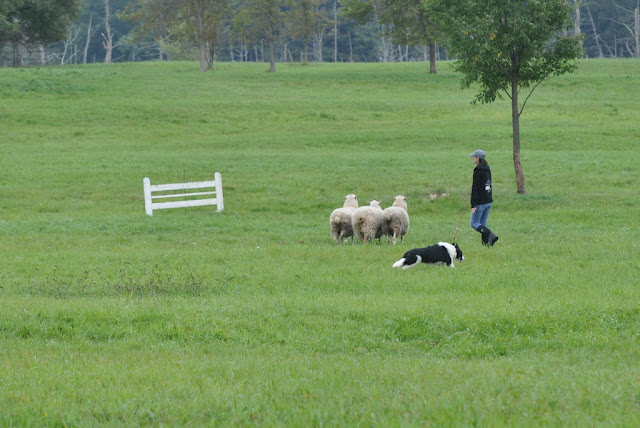 No style whatsoever, but we made the panels. 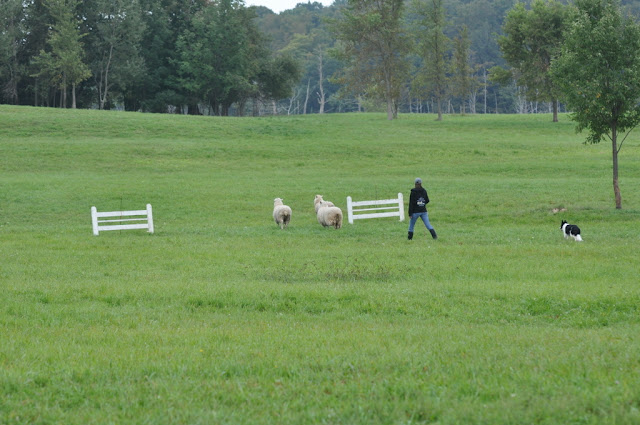 Heading to the pen. Dare came around too far to the come-bye side when we had to fix the line from our turn, and now she needs to flop around away to the other side to cover the pressure
from the exhaust to keep them on line to the pen. 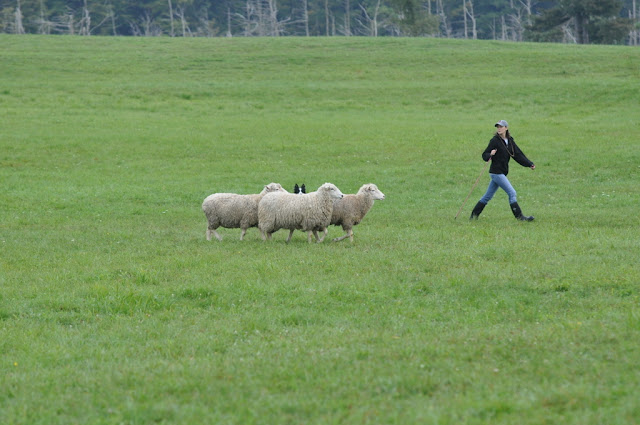 A bit of a bobble as the sheep had beat me to the pen, but not terrible; this photo shows the worst of it. They went back the way they came, and then in. Penning wasn't too bad at the trial, so it's annoying that I forgot to stop them so I could get to the gate first. They'd likely have gone right in. 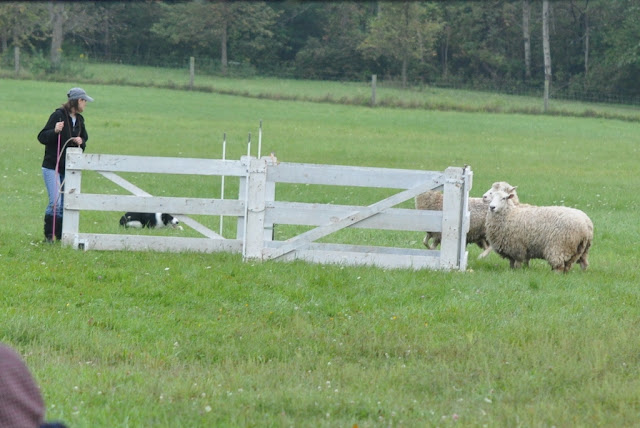 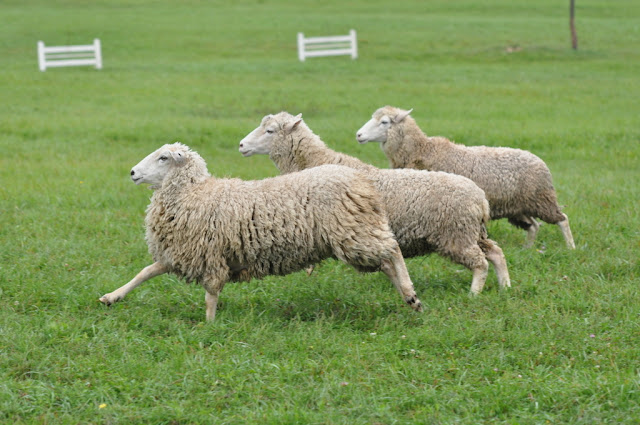 No smiling! I'd likely have been looking even more miserable if I'd known
that this would be the best of my three runs. 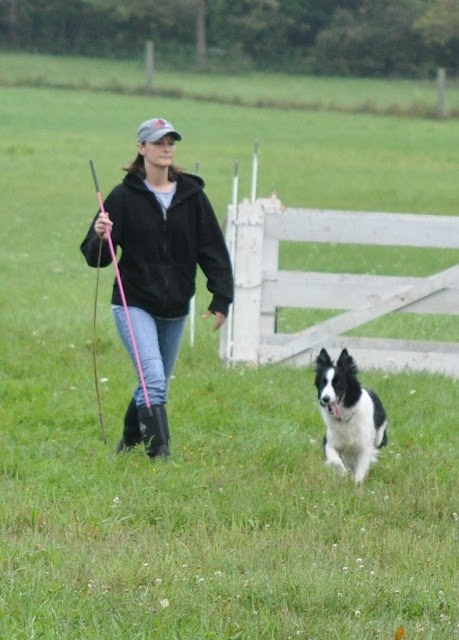 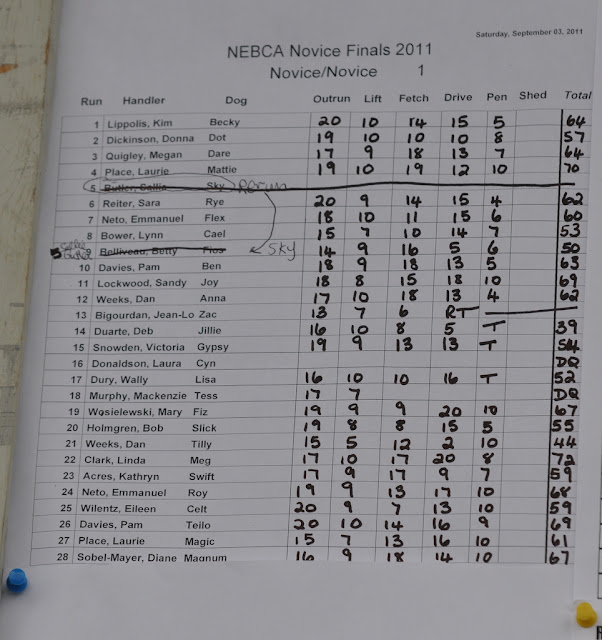 Run 2: The Bad
I tried over and over to make this embedded video a larger size, but Blogger was fighting it (it kept either showing the text of the HTML code, or it would give me an error when saving).
Sorry it's so small. Perhaps it's best you can't see the details!
Warren Mick holding, I think.

You're probably wondering just what that mess was worth?
(Third from last run; a 50.) 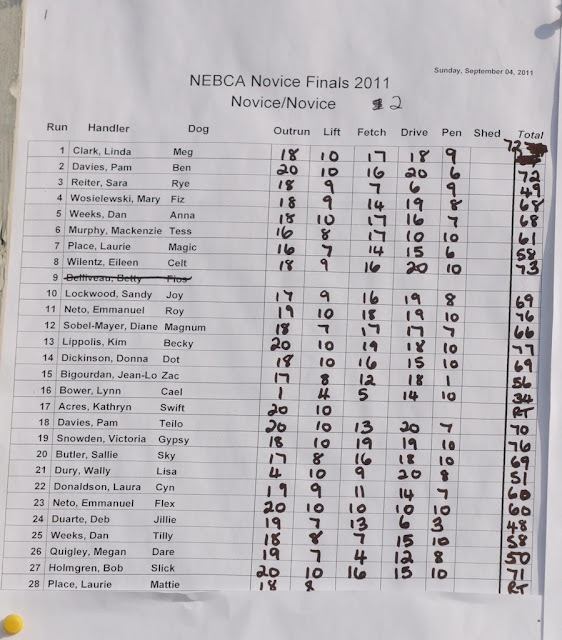 Run 3: The Slightly-Better-Than-Bad
Sunday was supposed to have started with Ranch 2,
but the fog was so thick we had to wait two hours just to be able to run N/N instead.
My run was second to last in the class, and by that time, severe weather was imminent.
It's hard to tell from these photos how really ominous the sky was. Peter had his lightning meter out and was manning the gate to the field to get us on and off quickly.
He said the field has been struck many times. 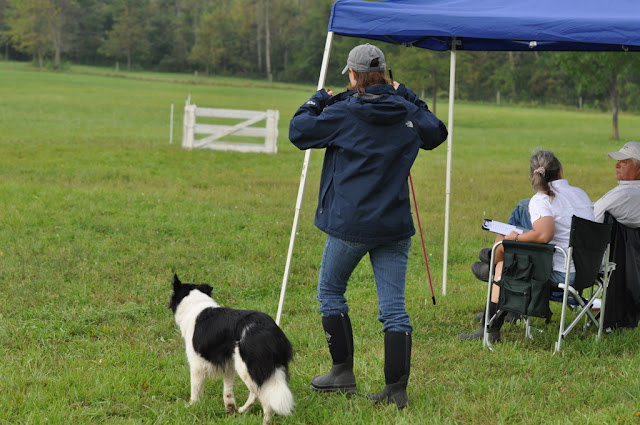 Wide enough, but not nearly deep enough.
You can see one sheep has already startled at her approach,
in part due to having been occupied with the grain (but also due to the way she came in).
Gene Sheninger holding, Maria Mick doing push out. 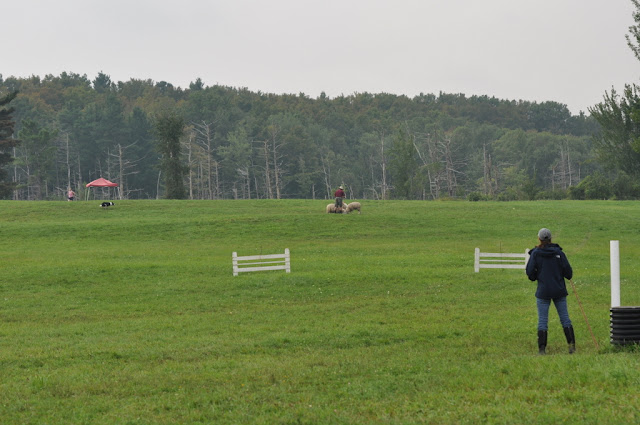 The result is that the startled sheep actually lost its footing and fell, while the other two took off down the fetch line. Dare locked in on those two and ignored the other one...and me. I couldn't get her stopped till she almost reached the fetch panels. You can see in my body language that I am dying to run at her right now! Very lucky for me, the single did not jet to the exhaust,
and I was able to get her to bring it back. 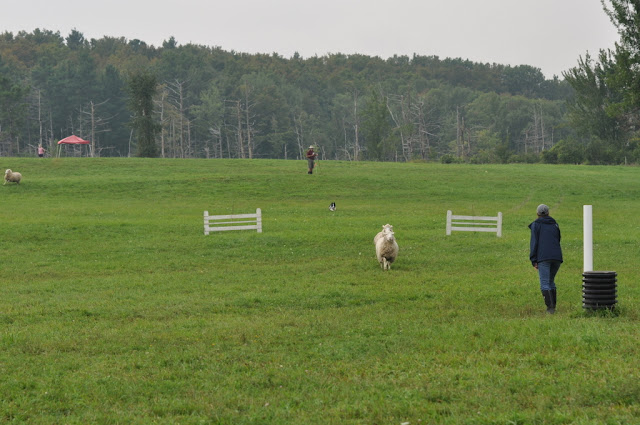 Turning the post the wrong way, which was the right way. 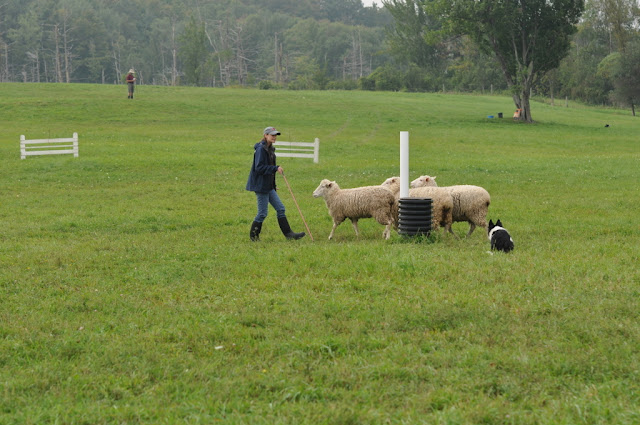 She'd been pretty bad all weekend on many counts (I wasn't doing much better!), and on the drive leg I got so sick of her not giving the sheep any room, not pacing herself and not taking my "time" or lie downs, that I swished my stick in front of her nose to push her out.
She moved off a little, but not by much. 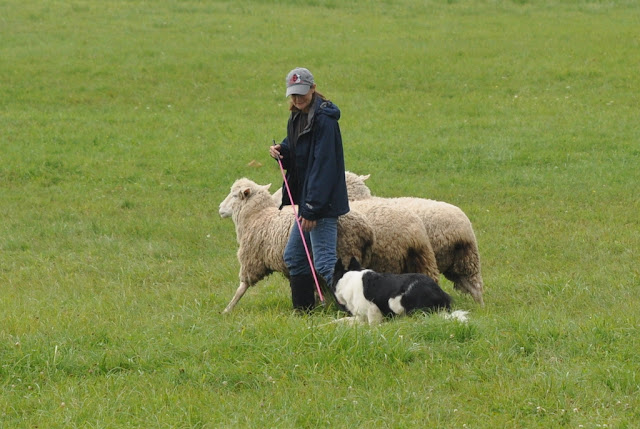 Lots more zig-zagging, but we made the panels and had an okay turn. I'm sure someone will say I should be looking at the sheep here, and when making a turn like this, yes, I should be.
I'm double checking my line to the pen as I forgot what I had picked out as my landmarks! 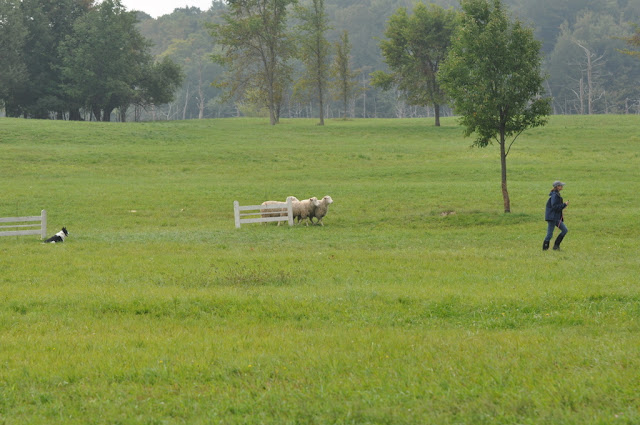 When I flanked Dare to cover the exhaust and to stop the sheep so I could get to the pen, she didn't stop where I told her to (not even close), so the sheep beat me to the pen gate again, and I had to have her push them back a little, but we got them in without any trouble.
Look how close she is here--totally unacceptable, and not tolerated in training. 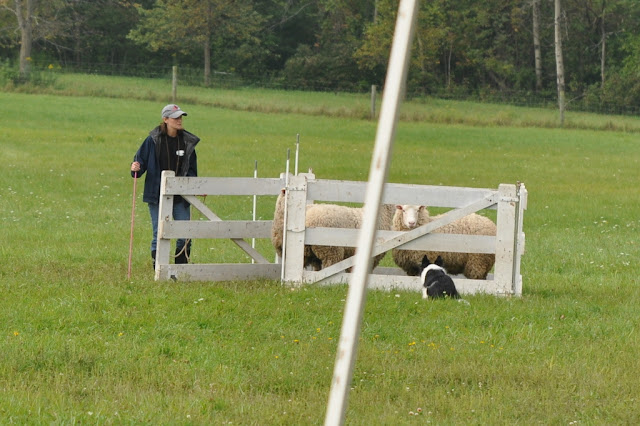 Three nights later, Dare had a fever, so it is possible that she just wasn't feeling good at the trial, but she was eating well and I couldn't get her to slow down. NO lethargy, no other signs of illness, so I am not sure I can use Wednesday night's fever explain away our performance on the previous Saturday and Sunday. (58 for our last run.) 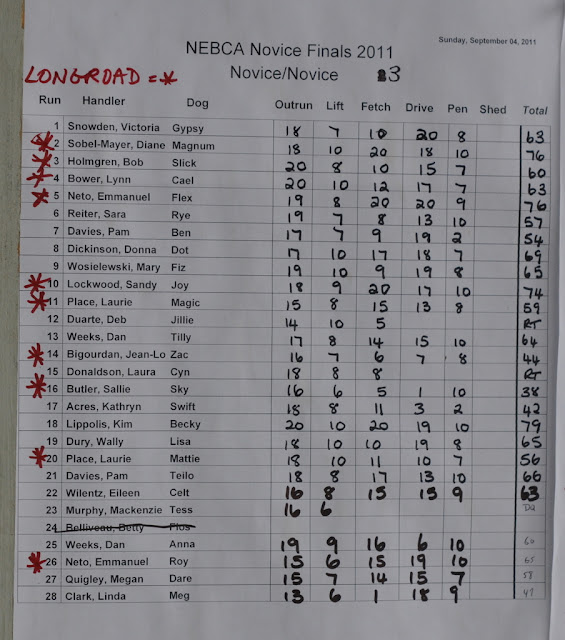 When the scores were tallied, we didn't even make it into the top 10. Very disappointing, considering the last time we'd been to the Novice Finals, we were fourth. We didn't run very well;  my disappointment is with us, not with the judging.

Next: A few other runs and scenes from the NEBCA Novice Finals.
Posted by Kelliwic at 18:30 No comments: