A few forgotten phone pics from Tuesday the 12th.
On our walk behind the hotel, down to the Roaring Fork River.
The water was high and fast, and truly roaring! 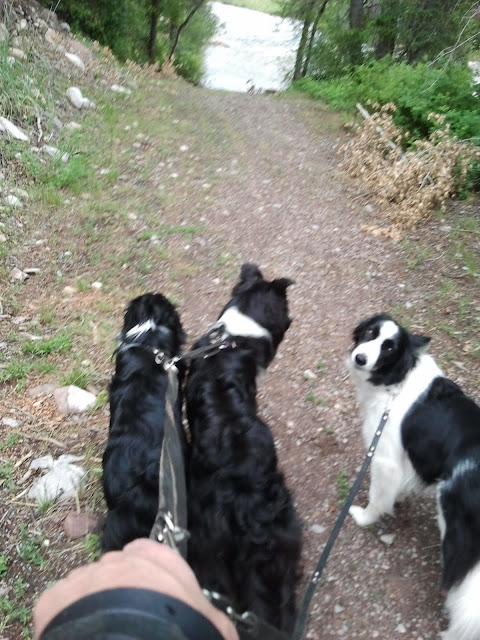 The scenery I had out my hotel window. The river is down in a gulch in front of that red cliff. There was also a guy living under the bridge behind the hotel, but it’s probably nicer not to post that photo on the blog… 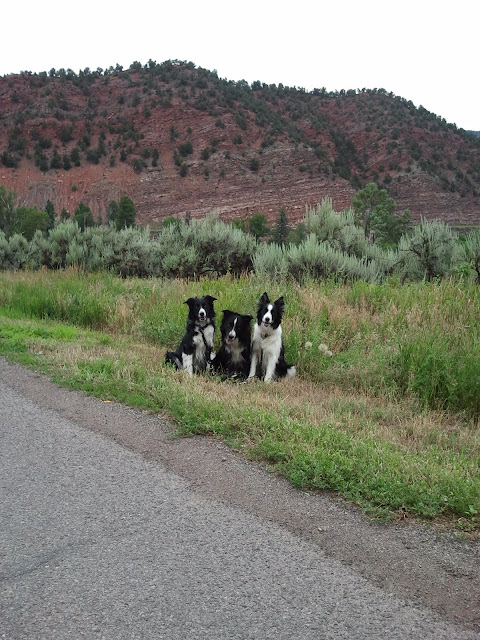 I got back on the road to Monte Vista Wednesday afternoon after our adventure on Aspen Mountain. The lucky dogs got to sleep the whole way after the exercise, fresh air, and sun. I was happy that the weather up at Independence Pass was much better than when I drove up.
On the approach to the summit, looking back towards Aspen. 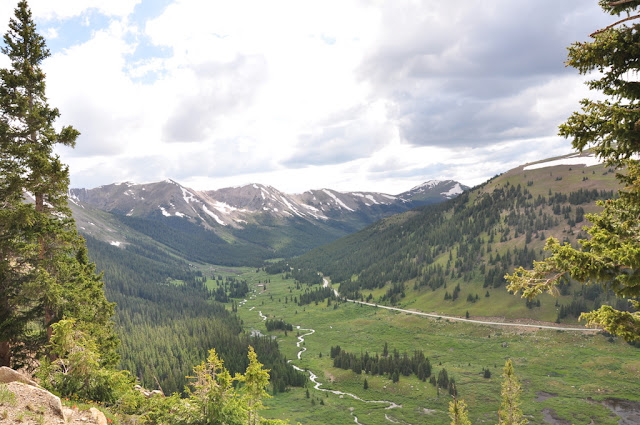 It was partly sunny and a balmy 61 degrees F at the summit, much nicer than 43 degrees and raining! I usually try to take posed photos of the dogs without leashes or collars, but we were not supposed to be off the path because the tundra is very fragile, so I just put them on some sandy areas for quick photos. 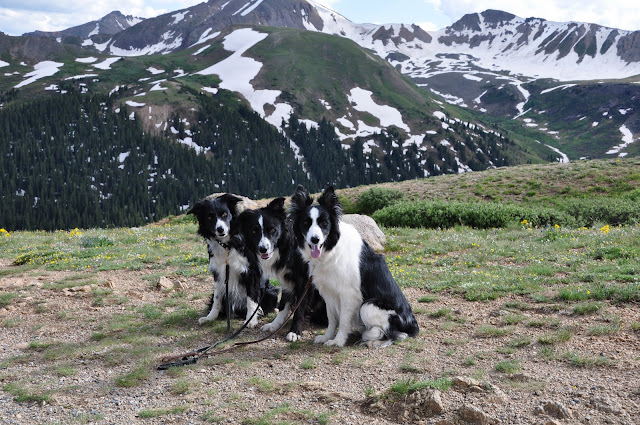 They were a big hit on the mountain. We were approached four different times by admirers in the 15 minutes or so we were there. J
Heh heh heh...Bran. 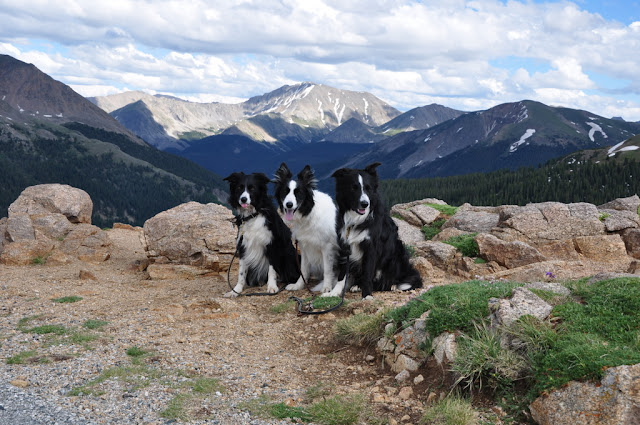 Oddly, my camera's flash was going off at stupid times all week, even in bright, sunny conditions. But on the summit, nothing! Guess it's better that you don't have the details of Seamus looking wonky in every one of these photos,
because he really isn't as wonky as he appears in these pics! 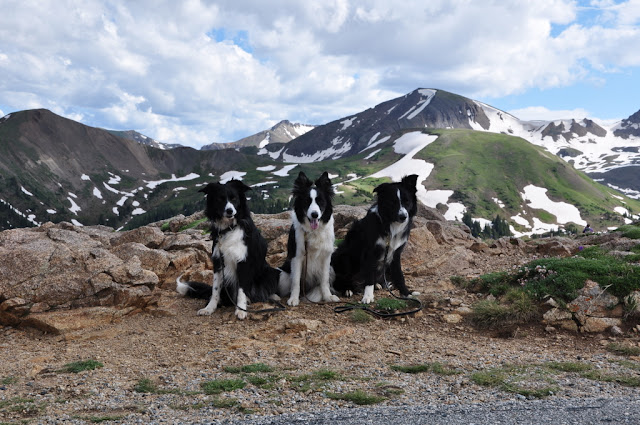 The really hairy hairpin turn heading south from the summit. 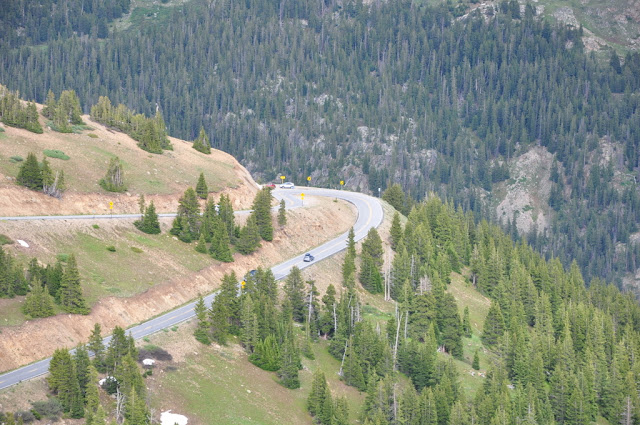 Moonrise over the San Luis Valley and whatever mountains those are.
Terry LePlatt told me what they are, but I forgot, darn it. 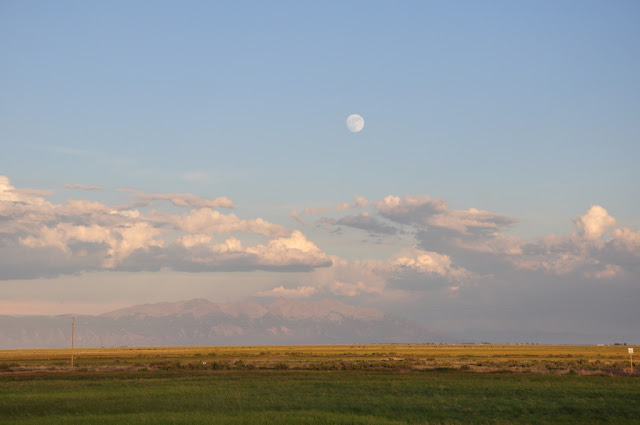 On Thursday, I headed back over to Tina LePlatt’s to work the dogs, and to meet Dan Keeton for the first time. He owns Seamus’s sire Newby; a littermate to Seamus, Nap; and Bran’s younger full sister, Sunny. Jenny had mentioned how much Seamus resembles Newby, and he sure does! I also thought that I saw some similarities in Seamus and Newby’s work style; I hope it isn’t just wishful thinking. I was also struck by how much Newby looks like his uncle, Laura Hicks’ Jag. All the family members worked really well and I hope that I can bring my dogs along, too.
Newby bringing them on. 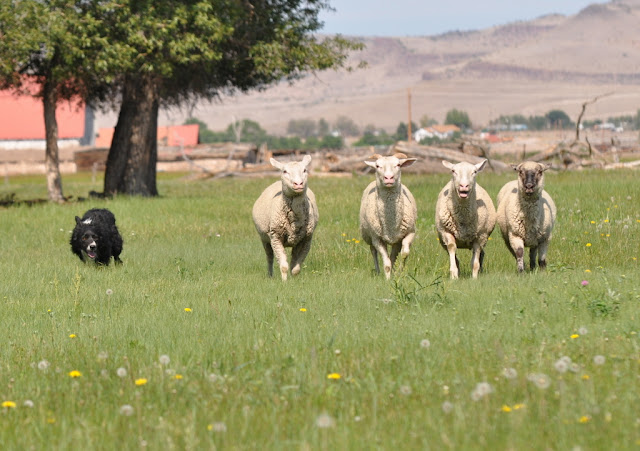 Nick holding after a fetch. 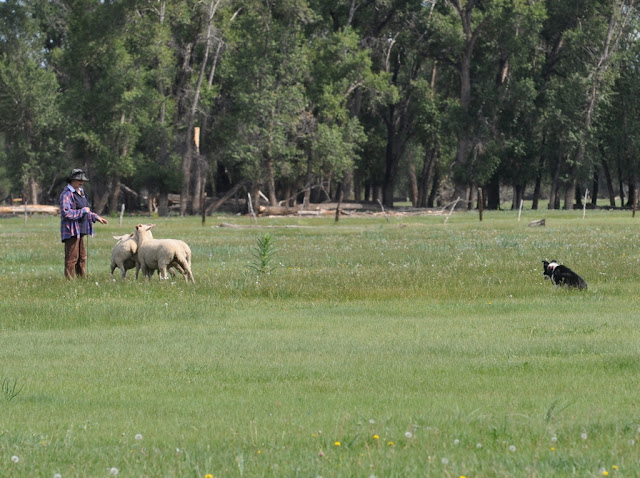 Sandy coming around her sheep nicely. 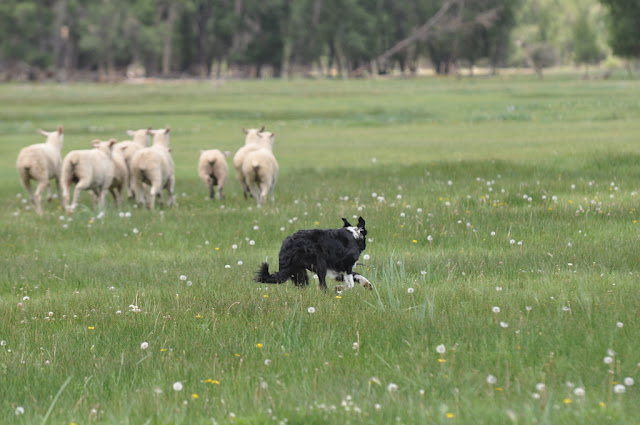 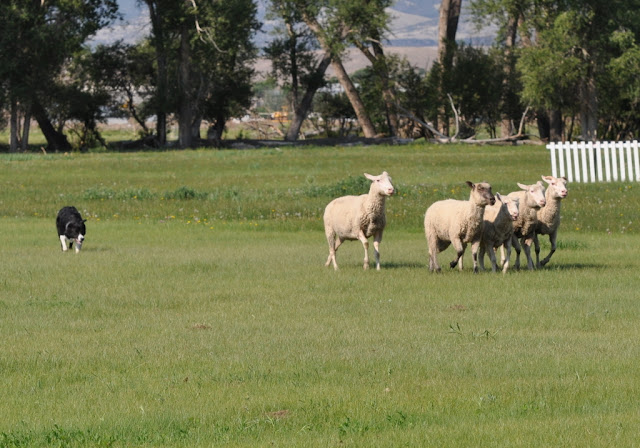 Bran worked okay for me, but I somewhat felt like I was expending a lot of effort for not a lot in return. However, she wasn’t misbehaving, and the joyful expression on her face made me smile. She’s such a funny little dog!
Bran starting a drive. Photo by Tina LePlatt. 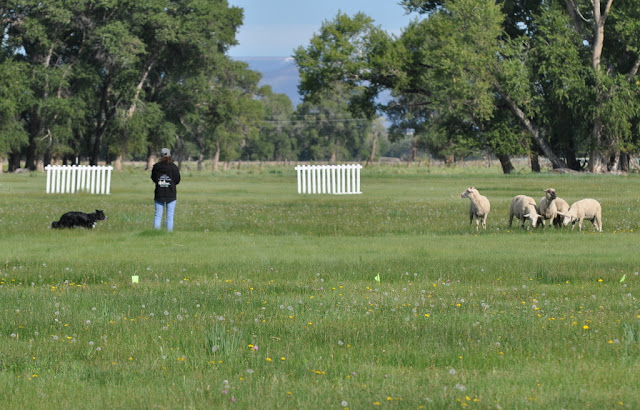 Newby, Dan, and me. Photo by Tina. 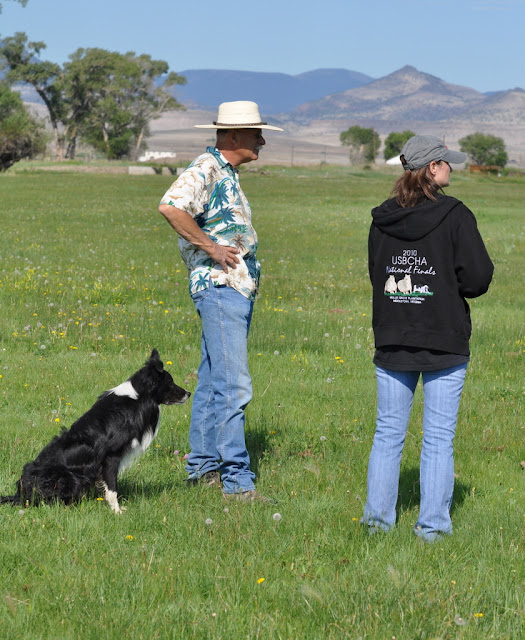 I worked Seamus, and he worked okay. Not incredibly well, not terrible. My battery was running low and the camera's memory card was getting full, so Tina just got this quick shot. 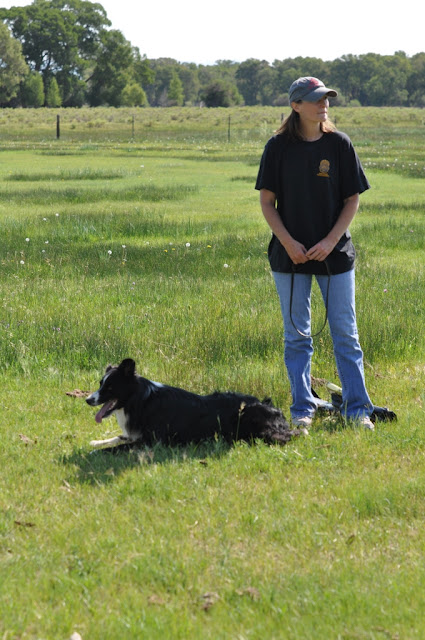 There were two packets of sheep on the field, and when I worked Dare, the second packet wasn’t being worked. I tried to separate them further, and worked at it for a little bit. In the end, Dare pushed on our packet too hard, they split and ran, and eventually both groups ended up together. Ah well…
Dare bringing me one of the two groups. 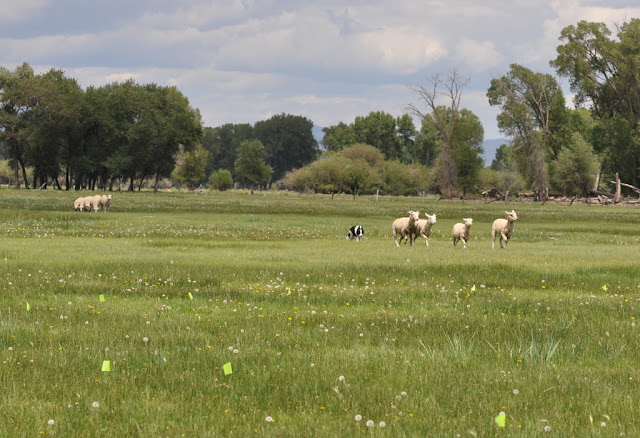 After we worked, we needed to rearrange some sheep. I used Seamus to get a group out of an exhaust pen, and I unwisely took him off leash to do so. When we got around the sheep in the pen, they bolted out, and Seamus took off in hot pursuit. He never considered responding to my lie down, recall, get out of that, or anything. He chased across the field, the bridge over the creek, and finally across the smaller irrigation ditch. Seamus thought he could walk on water and went right after the sheep across the ditch, but sunk like a stone, and came out the other side stunned and humbled. The sheep was totally fine, and therefore I could afford to laugh at the self-correction my dog received, although I certainly wished the chasing hadn’t happened at all. I wish I had an as effective means of correction on hand for each time he loses his mind, as that would probably bring him around right quick!
Newby again, just because. 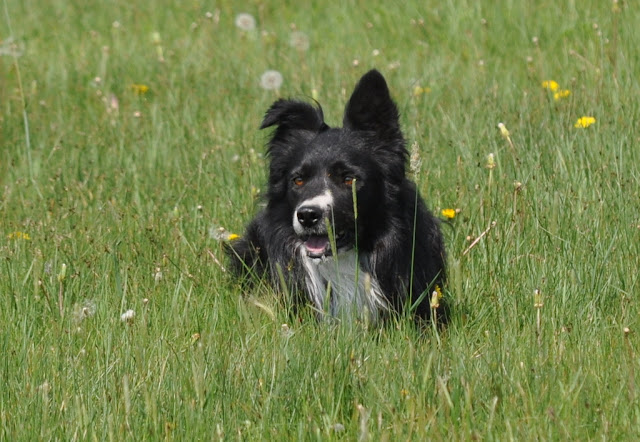 Next: Nicomedes Gulch Trial, and homeward bound.
Posted by Kelliwic at 16:24